We offer a number of reporting options for your website. They range from comprehensive analytics reports to real-time system status reports.

Pro Epic Customers may request a custom Google Analytics Report. A Gmail address or an address controlled by Google is required to access the reports.

Here is a link to a Live Report Example

Available for free on all websites managed by Pro Epic.

Google Analytics is a web analytics solution provided by Google that reports and tracks website web traffic. It is a platform inside the Google Marketing Platform brand. Google launched the solution in November 2005 after getting Urchin.

Google Analytics has undergone several variations since its beginning. It is presently on its 4th model of the platform, which is called GA4. GA4, currently being the default Google Analytics setup, is the renamed version for the App+Web Property that Google had released in 2019 in a Beta version. GA4 has now changed UA, Universal Analytics. One significant function of GA4 is a natural combination with Google's Big Query, a function formerly only available with the venture GA 360. This step suggests that Google incorporate GA and its free users into their more significant cloud offering. 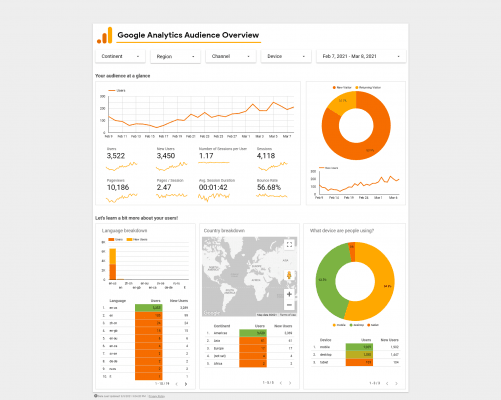 We follow Gibbs' Rule #35: "Always watch the watchers". We use these links to keep an eye on the folks who are watching after us.

Available for free on all websites managed by Pro Epic.